Notes on the Ancient Geography of Gandhara

On Disasters in India

Legends of the Konkan

The Geochemistry of the Volcanic Rocks of Pavagarh, Gujarat, India

By: B.W. Hodder and Roger Lee

Bimala Churn Law's Geography of Early Buddhism fulfils the long and acutely felt need for such a work; for many of the topographical features, both real and imaginary described in ancient literature, exist no longer. Early Pali literature, Jataka tales, Asokan inscriptions and the account of Chinese pilgrims contain much geographical information along with a mass of other details. All these scattered facts are collected and arranged here in a systematic manner so as to bring out a coherent geographical picture of ancient India. The chapters are so planned as to bring out clearly the various ph... View more info

Geography of Indian Empire and Ceylon

Narrative of the Mission of George Bogle to Tibet (A.D.1774) and the Journey of Thomas Manning to Lhasa (A.D.1811)

The North-Western Provinces of India: Their History, Ethnology, and Administration

A Primer of Gis: Fundamental Geographic and Cartographic Concepts

The Geography of British India, 2 Vols.

By: Hugh And Colleen Gantzer

Harry Potter’s Hogwarts is a magical place. But it’s an unreal one: it does not exist. Hugh and Colleen Gantzer have discovered magical places in India that are real and accessible. What is the origin of the fear that a monster lies beneath the surface of the high, blue, lake of Pangong Tso? Who was the Englishman who carved out his own kingdom in the Himalayas? What gourmet dish was created by a ruler to feed his famished subjects? What is the epic tale of the white shrine where the weapons of a martial saint are revered? This is not a travelogue, or a guide book, or even a retelling of a... View more info

An Historical Sketch of Goa

Chhattisgarh: A Study in the Culture and Historical Geography (from Place Names in Inscriptions)

It began five hundred years ago when the very first modern maps of India were drafted. Travellers, wanderers, explorers and traders came overland from the West and carried back tales about the India of their perception. The first maps of India were drawn based on the accounts of these men. When the sea route to India opened, sailors ferried back information about the ports they touched on their way to India. Marine charts of the routes along the ocean coasts and artistic representations of port cities followed. As Europeans came in large numbers to trade and conquer, new territories further in... View more info 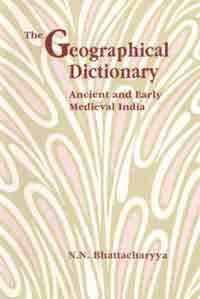 Due to the expansion of Indological researches in various directions in recent years the earlier works on historical geography ceases to serve the desired purpose adequately. Hence the need for a more comprehensive and up to date work was there. The present volume with a vast mass of materials, alphabetically arranged, is apt to meet the requirements of the students and researches of the present generation. A detailed introduction in the present volume will make the readers acquainted with the source materials. Special emphasis is laid upon the epigraphical and textual references. The geograph... View more info

Studies in the Historical Geography of Ancient India

By: O.P. Bharadwaj; Foreword By Prof. B. Ch. Chhabra

Mystics of the East

The East has been for centuries -or perhaps forever – the holy, the sacred source of life. Not only the sun rises in the East, a Gautam Buddha also rises in the East. The East has produced thousands of mystics. In comparison, the West is very poor. Just as the West has created great scientists, the East has produced great explorers of one’s own being. Still, in its most degraded state, in its darkest era, the East attracts the seeker – almost like a magnet. Those who want to seek the truth, those who want to know themselves, suddenly feel an attraction towards the East. Printed Page: 25... View more info

Geography of Jammu and Kashmir

By: Pandit Anand Koul; Updated and Introduced By P.N.K. Bamzai

Allahabad: A Study in Urban Geography

The Geography of Padra Town

Memoir on the Sawunt Waree State