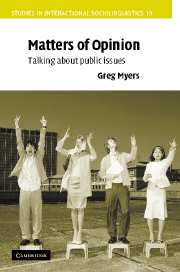 Matters of Opinion offers an interesting new insight into ‘public opinion?as reported in the media, asking where these opinions actually come from, and how they have their effects. Drawing on the analysis of conversations from focus groups, phone-ins and broadcast interviews with members of the public, Greg Myers argues that we must go back to these encounters, asking questions such as what members of the public thought they were being asked, who they were talking as, and whom they were talking to. He reveals that people don’t carry a store of opinions, ready to tell strangers; they use op... View more info

A Time of Coalitions: Divided We Stand

This topical and absorbing book, written by two eminent journalists, convincingly argues against two commonly held beliefs concerning Indian politics. Their basic premise is that India has come a long way from the time when a single party, the Congress, dominated our polity. Instead, it has given way to multi-party configurations or coalitions which, they demonstrate, are neither temporary nor an aberration—coalitions are here to stay, they say, at least in the foreseeable future. Second, they expertly dismiss the view that India’s polity is essentially bipolar, led by either of the two la... View more info

Parties and Party Politics in India

This is the Oxford India Paperback of a very successful hardback published in 2002. The volume brings together essays on wide ranging issues that impinge on political parties and the challenges confronting the party system in India. Presents an overall picture of the origins, evolution and transformation of party politics post-independence. Printed Pages: 582 with numerous tables. View more info