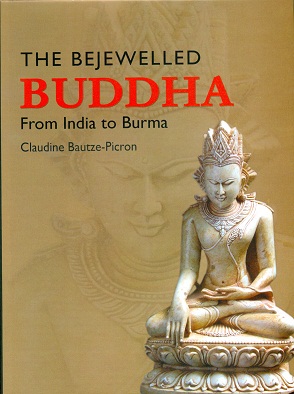 The Bejewelled Buddha: From India to Burma. New Considerations

This book represents a comprehensive study of 'The Bejewelled Buddha' considering stylistic as well as iconographic issues. A crucial moment in the Buddha's life seems to have been referred to through this image, namely, the sojourn on Mount Meru, where the Buddha sat on Indra's seat and taught all the gods. By occupying the seat of the king of the gods he was able to endorse the royal function of this deity; this becomes particularly evident in the late fifth century, and probably reflects the dramatic situation that the Buddhist community was confronted with, i.e. the political power essentially fostering the Hindu religion and social structure. Hence, the Buddha is depicted as a perfect and powerful ruler sitting at the top of the universe and showing himself adorned as a king; more than any human ruler, the Buddha rules over the universe. There is also another dimension that should never be neglected - as in any other Indian cult, worship of his image entailed offerings of various kinds, such as flower garlands or jewels, being made to the Buddha. The image of the Bejewelled Buddha thus included various constituents while at the same time it was used as the locus where different religious or political concepts found a way of expression. The result was the creation of an image of multi-layered significance which found its way into all Asian cultures. Printed Pages: 206 with numerous b/w illustrations.

Title: The Bejewelled Buddha: From India to Burma. New Considerations

The Bejewelled Buddha: From India to Burma. New Considerations