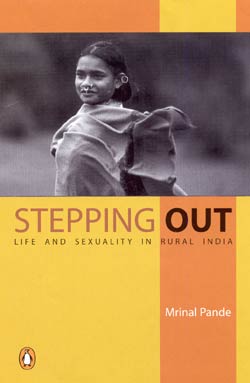 Stepping Out: Life and Sexuality in Rural India

Consider the following: Eleven out of twelve abortions in India are illegal. The 2001 Census showed a decline in the number of females per thousand males in the most literate and prosperous states, especially in the 0-5 age group. The private sector has more doctors and fewer beds than government hospitals, thereby emphasizing outpatient care. And while Indian traditions sanctify fertility and motherhood, government policies and health care services are focused on controlling fertility. These are some of the paradoxes of India’s health care system Mrinal Pande encountered when she set out on her journey across several states to put together information on the health of Indian women. She soon realized it could not be a mere documentation of the history of reproductive health in India and the state of India’s public health care system. Through listening to women’s perspectives on their bodies when they came for treatment and conversations with dedicated health workers, she gained an insight into larger realities. The result is a patchwork quilt of narratives about women’s lives—how they are affected by their environment, their perspectives on male and female sexuality, the mystery of pregnancy, the joy of birth, the fear of infertility, the pain of backroom abortions and the often bleak world of adolescent girls. Mrinal Pande also discusses important issues like the population policies followed by the government over half a century and the consequences of a welfare state abdicating its obligation to provide basic health care for all in its pursuit of globalization and market economics. Through it all she reveals enormous faith in the role of non-governmental organizations in providing better health care services—the dedicated doctors and attendants who are making a difference, helping women step out from the dark bylanes and silences of their lives to create a socio-cultural milieu which restores their basic dignity and rights. Printed Pages: 256.

Title: Stepping Out: Life and Sexuality in Rural India

Stepping Out: Life and Sexuality in Rural India